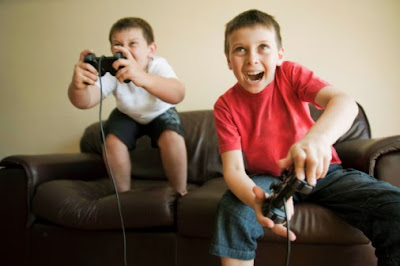 Video games have gotten a bad rep. Are we losing our minds to the television screen and gory blood battles with friends? I don't know. Are America's butts getting big because we stare with mouths agape at overstimulating amounts of light and sound for hours on end? Maybe.

I really don't know how to answer these questions. But instead of focusing on these criticisms, I want to shine a new light on video games. Can the powers of a video game be used for good rather than evil?

Well, I would certainly say so! These days I play more video games than I ever did in my youth. I don't own a Wii, but the Adolescent Unit at BHC does! At BHC, the kids can earn points which can be spent playing video games (as well as other things like leaving the unit for meals, playing outside, etc.). But occasionally, we'll break out the Wii in MT session. Why? Just think of all the skills that can develop when playing a music-based video game: focus of attention (that's an important one), self-esteem (another biggie), appropriate socialization (sharing, good sportsmanship, team-building), cognitive stimulation and mental alertness, motor skills (fine and gross), and knowledge of music education. If you're thinking that your clients could benefit from some of these, consider the following music games:

1.Just Dance! My favorite! Players mirror the movement of a silhouette on the screen. Points are for accuracy of movement and timing. You'll be seeing a new version in stores October 12! There is a mode in the game where players are directed to start/stop dancing (think impulse control!).
2.Karaoke Revolution Players sing along to popular songs and are given points for accuracy of pitch. There are quite a few releases of this game in stores.
3.Wii Music Players can learn about various musical instruments. They can express creativity by creating a band and jamming together. They can also be tested cognitively in the Minigame mode.
4.Donkey Konga Tests rhythmic accuracy. There are a couple versions of this in stores. The game comes with a set of Wii conga drums!
5.Rock Band Doesn't everybody know about this game by now? Its cousin, Guitar Hero, is equally as popular. The game comes with Wii guitar, drum set, and microphone. Players battle for points by testing finger dexterity and rhythmic accuracy.