Tearing down and rebuilding 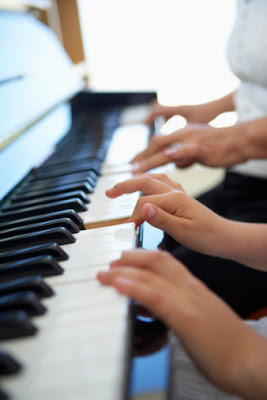 I do a little bit of babysitting on Saturdays, and there is a child I sit for that has autism, cerebal palsy, and epilepsy. Part of the agreement for babysitting was that I would sit with him and do a 20 to 30 minute music session (without being paid for it since I'm not yet graduated/certified). For a while the sessions were awesome! He and his brother would attend and we'd work on goals of social, motor, speech/language, and academic skills. The sessions were really successful until one day, the boy was no longer interested in music sessions.

I tried unsuccessfully for a couple weeks to engage him in any activity I could think of, but he would tell me "no" and leave his chair. Without the parents there to reinforce I was at a loss for a solution. A couple more weeks passed, and for various reasons I was not babysitting, thus no music.

So we started the regular routine again the other week, and I decided to approach music in a new way. I brought my keyboard with strips of colored paper taped to an 8-note C scale. The first week I tried this, I let the boy play as he wished on the keyboard. It was my goal simply to get him engaged in music again and hold his attention for a period of time. It worked! He took a special joy in hearing all the pre-recorded songs. To continue where I left off, this past week I began the session by reviewing colors. He played up and down the C scale with my cue to play "red," "orange," etc. Then, I let him again play with the songs, throwing in little tasks occasionally. We worked on colors, numbers (pressing certain numbers to get songs), and sequencing (color, number, number). Then we played a game to address impulse control. When the music played, we danced. When the music stopped, we stopped. Then it was his turn to lead.

This was a really good way for me to build up music again. The point of the story is to be creative, and if you really need to build from scratch, don't be afraid to do so. I hope to do a little more with him this coming Saturday. If all goes well, I will post about it here. Even if all does not go well, I'll still post. There is always a lesson to learn out of everything in life.
at 1:55 PM